Professor Connson Locke explores the reasons why women receive backlash for being too assertive and what they can do about it to be taken seriously in leadership positions. 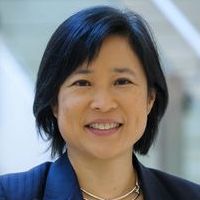 We’ve all heard that women who are too assertive tend to get backlash whereas men can assert themselves with impunity. You might even know a woman who has been told she is too aggressive or pushy. Yet women need to assert themselves to get ahead and be taken seriously in leadership roles. What’s going on here and what can women do about it?

The main culprit causing backlash is the gender stereotype that says men are supposed to be ‘agentic’ (strong, assertive, decisive) while women are supposed to be ‘communal’ (warm, sympathetic, kind). We learn these rules subconsciously from childhood when boys are told to stop crying and be strong and girls are told to play nicely and take care of their siblings. These are outdated stereotypes from when gender roles were strictly prescribed by society. Nowadays, we have an increasing number of women taking on leadership roles and men taking on parenting roles, and we need to move beyond this old way of seeing the world.

Backlash is something that occurs for both men and women. The original study of backlash found that women who were self-promoting (agentic) and men who were self-effacing (communal) both received negative judgements. The difference is that the solution is easier for men who want to attain leadership positions: be more agentic – which is what leaders are supposed to be and is consistent with the male stereotype – and the backlash disappears. For women, however, the solution is not so clear. To be seen as a competent leader, they must be agentic, but this results in backlash. If they behave communally instead, then they are liked, but do not appear as competent.

This is why leadership courses for women are so critical: because exercising influence is more complicated for women than for men. Since being agentic is a requirement of leadership, how can women in leadership positions avoid backlash?

First, learn to balance agentic and communal behaviours. This could mean combining them at the same time, such as using body language that conveys both confidence and warmth (e.g., sounding confident while smiling). Or it could mean choosing the appropriate style for the situation, such as sometimes making decisions unilaterally and other times inviting participation from team members.

Secondly, learn to assert yourself nonverbally. For example, if someone is trying to interrupt, instead of saying “I’m not finished!”, you could instead speak a bit louder and continue speaking. Learning to use the nonverbal channels (body language, facial expression, and vocal qualities) is a powerful way of communicating and can make you more influential.

Most importantly, we need to be aware of the ways in which the gender stereotypes prevent men and women from achieving their true potential. Men should be accepted in communal roles (e.g., parenting, nursing), just as women should be accepted in agentic leadership roles. In fact, being agentic and communal are both useful aspects of leadership – but they do not need to be gendered. Ideally, all leaders, male and female, would use a balance of agentic and communal behaviours. Imagine how different the world would be if we valued compassion in our leaders as much as we value assertiveness.

Connson Chou Locke joined the Department of Management in 2008 where she teaches leadership, organisational behaviour, and negotiation and decision making. She received the Department of Management Outstanding Teaching Contribution Award in 2013, was Highly Commended for Inspirational Teaching in the Student-Led Teaching Excellence Awards in 2015 and 2017, and received the LSE Excellence in Education Award in 2018. Professor Locke holds a PhD and MSc in Business Administration (Organisational Behaviour) from the University of California at Berkeley and a BA in Sociology from Harvard University where she graduated with honours.

The Negotiation Programme Online Certificate course, designed by Professor Connson Locke and Dr Tara Reich, will maximise your negotiation skills for business and career success. Over six weeks you'll explore strategies to resolve conflict during a negotiation and strengthen business relationships, enhance the impact of subconscious bias, culture and nonverbal communication in a negotiation and understand your personal negotiation style, learning how to analyse, plan and manage negotiations successfully.