House them in detention centres. Build a wall. Fly them to Rwanda. The policy might differ in detail, but the message broadcast by governments around the world is remarkably similar – “illegal” immigrants are not welcome, and borders are needed to ensure as many as possible fail to make it to their end destination.

Anti-immigration policies may have been championed for decades, but few could argue these have resulted in reduced immigration rates or been a success: according to the latest IOM World Migration Report, an estimated 281 million people – or 3.6 per cent of the world’s population - migrated internationally in 2020 alone. And numbers are only predicted to rise. Despite the political rhetoric, it is clear that current approaches are failing to deter people from making what is often a dangerous and desperate journey.

The state cannot claim that it does not know what is happening to migrants, but it accepts this human cost because it wants to make the migration experience very unpleasant, if not lethal.

For Dr Sonja Wolf, a Visiting Fellow in the Latin America and Caribbean Centre at LSE, the disconnect between political rhetoric on migration and the reality facing those making the journey is clear. “My research focus is on Central America and Mexico, and we find that very similar policies - known as iron fist or militarised security policies - get implemented across those countries,” she says.

“In Mexico, for example, the violence of the drug war has been well documented, and we know the effects of Mexico's militarised security policy - it’s a very perilous journey for people. The state cannot claim that it does not know what is happening to migrants, but it accepts this human cost because it wants to make the migration experience very unpleasant, if not lethal. This is all part of the idea of deterrence.

“We know these policies do not work. And yet despite all the research evidence that shows how harmful these policies are to migrants, governments keep on recycling the same approaches because governments want to keep poor migrants – who they perceive as undesirable – out of their jurisdictions.”

Watch the trailer for The Vertical Border (with English subtitles)

It is this seeming reluctance for policymakers to adopt less anti-migrant approaches that led Dr Wolf to take a radical move into documentary production. Her film, The Vertical Border, documents the journeys of “forced migrants” - people who have, through violence, climate change or economic circumstances, found themselves with no choice but to try to build new lives abroad – as they make the journey north, from Central America and through Mexico with the ultimate aim of crossing into the United States.

“What led me to do this was really this realisation that, although we want to do impactful research, often this impact is quite elusive,” Dr Wolf says. “We can share policy recommendations with policymakers, but we then have to rely on them to act on the research evidence we’re presenting.

“I wanted to find new ways of telling the story. In this case, the story is why people are forced to leave their communities and their countries of origin, but also what happens when they arrive in other countries. So, the film also focuses on how Mexico and the United States are responding to the arrival of mostly poor migrants, who have had to cross borders unlawfully because they have no visa to enter those countries. We really see, through their experiences, how the concerns of the United States have filtered through the countries migrants have to travel through in order to reach their destination.”

Poverty, climate change and violence are all reasons people are forced to migrate Two men watch the sunset in Playas de Tijuana, where the border wall that separates Mexico from the United States ends. Its initial construction in 1994 was made with remains of military materials used in the Vietnam War and the Gulf War. Tijuana, Mexico, 23 September 2021. 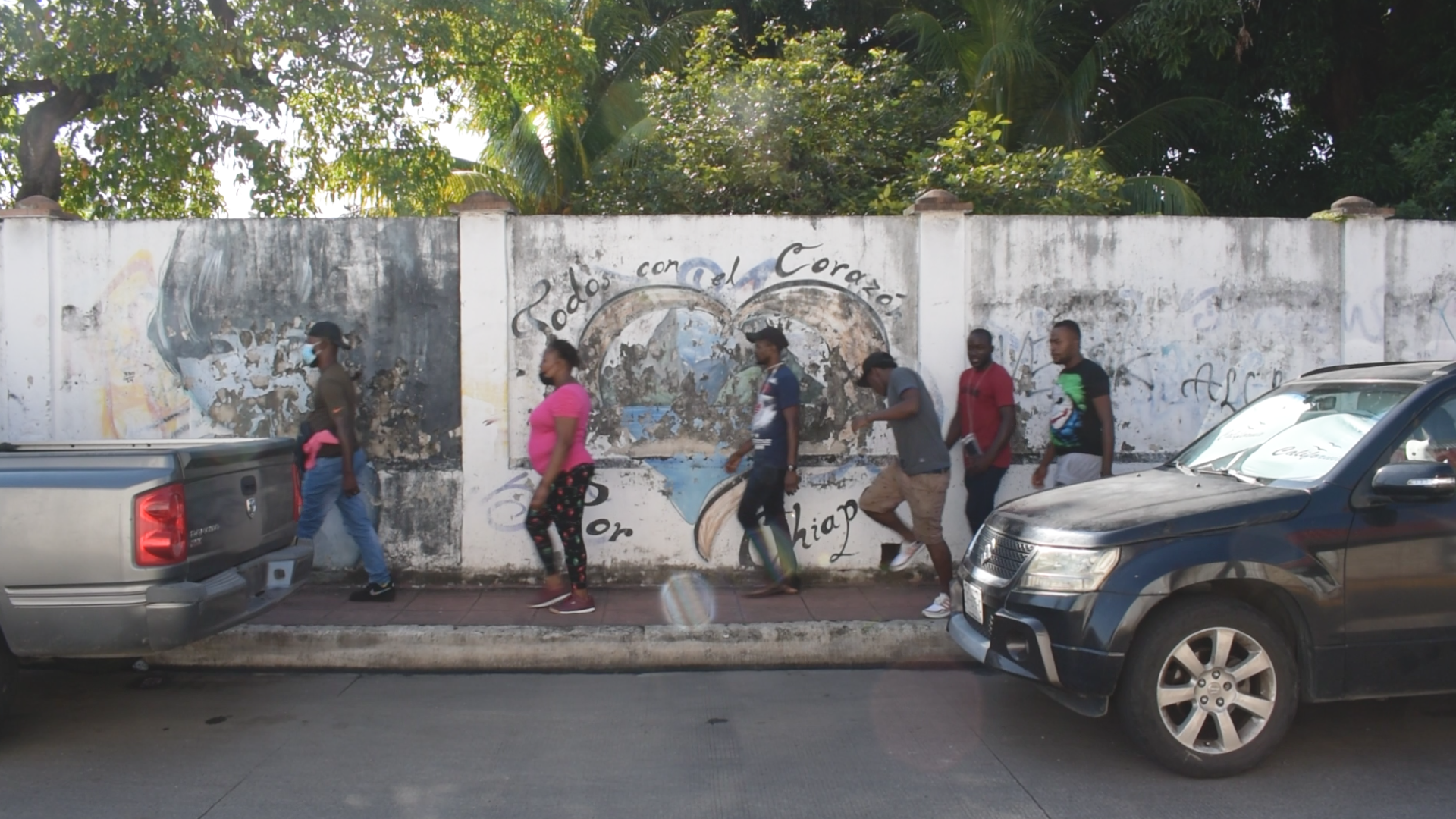 Haitians on their way to an appointment at the Mexican Commission for Refugee Assistance. In August 2021, more than 40,000 Haitians were estimated to be stranded in Tapachula. Downtown Tapachula, Mexico, 8 September 2021. 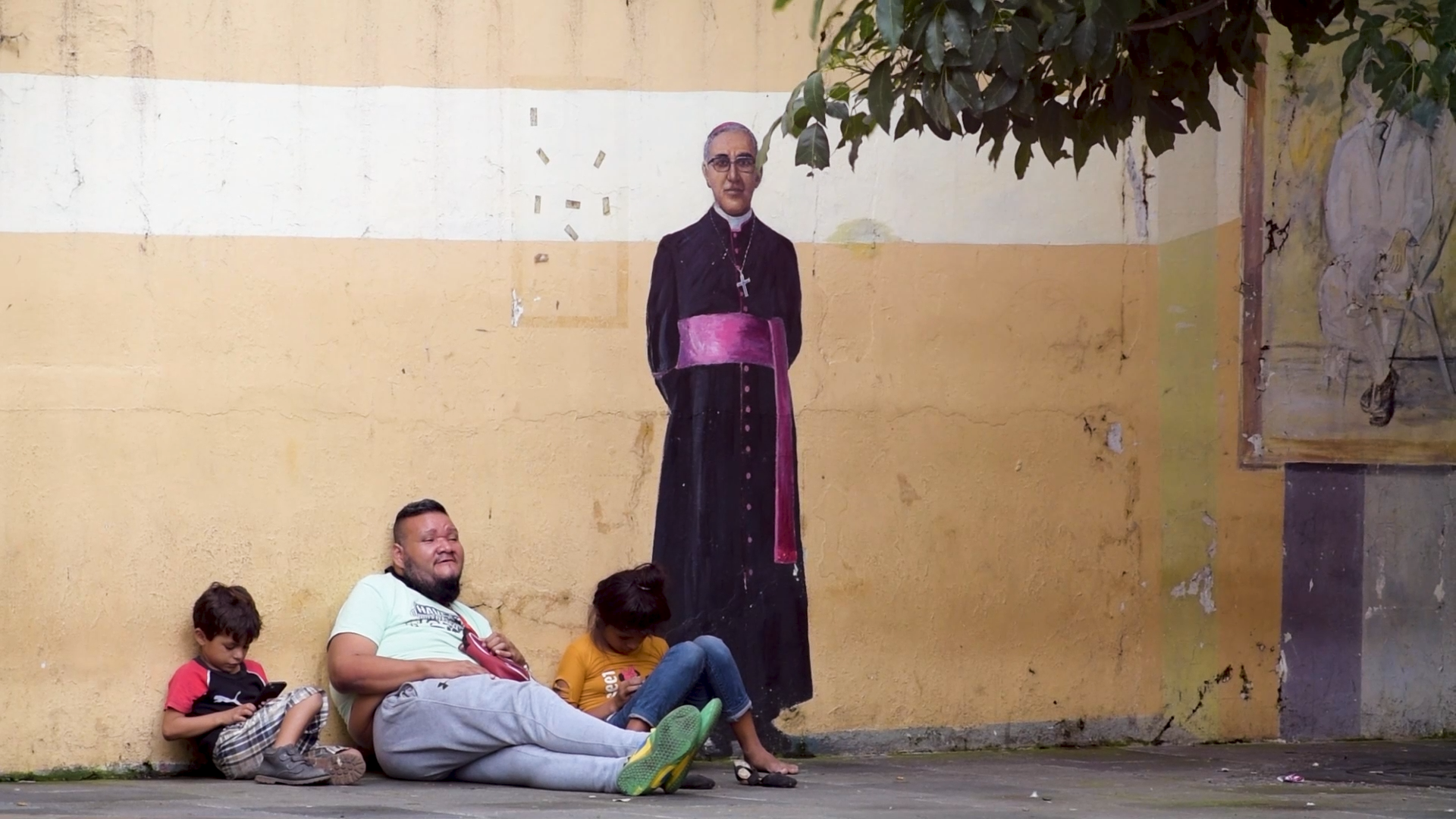 A mural depicting Monsignor Óscar Romero, Archbishop of San Salvador, known for his sermons defending human rights. He was assassinated on 24 March 1980, at the beginning of the Salvadoran civil war. Historic Center of San Salvador, El Salvador, 31 August 2021. 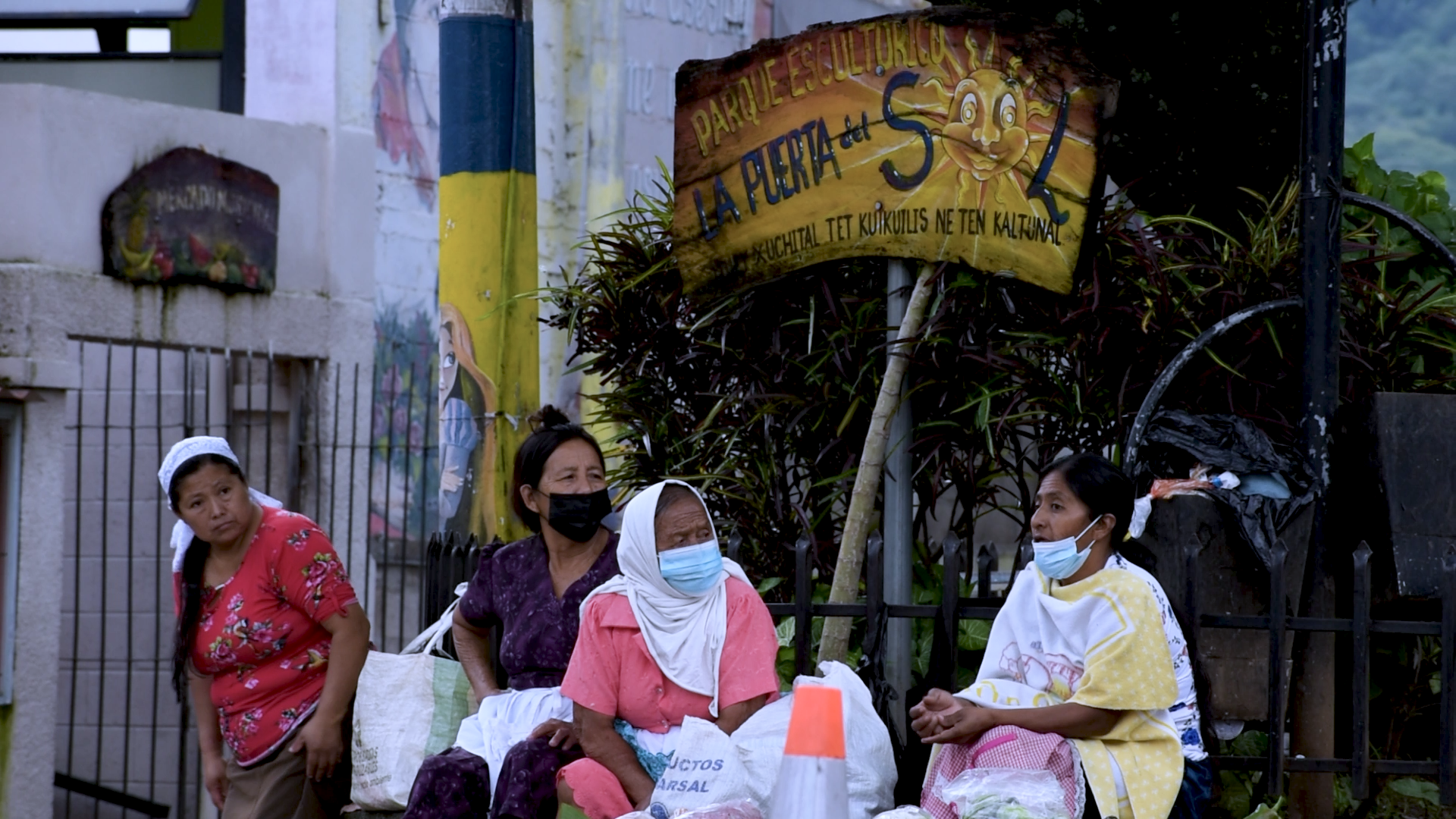 Women sell vegetables under a sign in Spanish and Nahuat. The indigenous Pipil were the main victims of the 1932 La Matanza, a massacre in which the government of General Maximiliano Martínez murdered tens of thousands of Salvadoran peasants. Panchimalco, El Salvador, 1 September 2021. 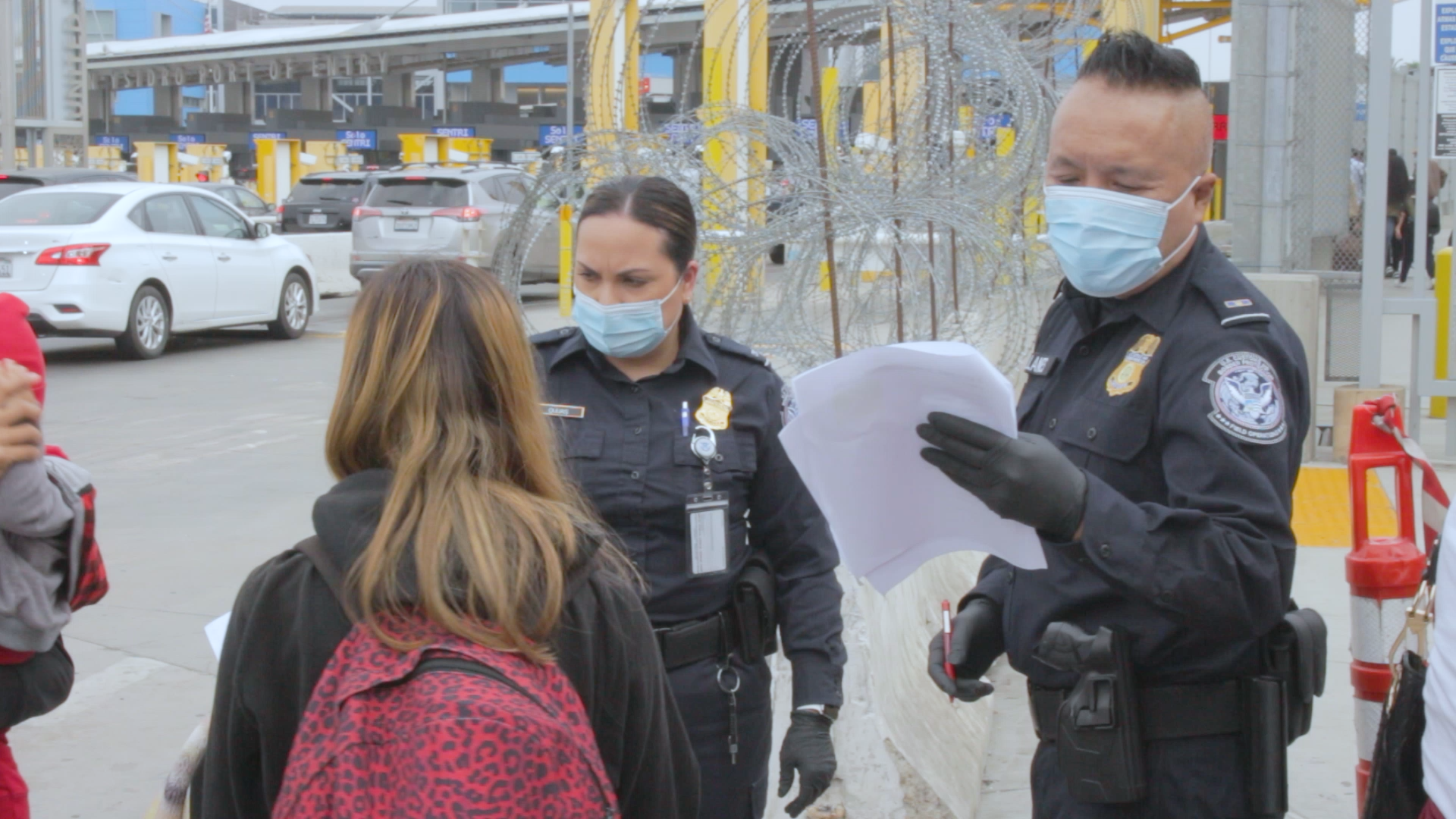 US Customs and Border Protection (CBP) officials check the papers of a Honduran person who obtained a special permit to cross the port of entry of San Ysidro to apply for asylum in the United States. Since the beginning of the pandemic, Title 42 is a US-implemented measure that prohibits the crossing except for residents, nationals or individuals with a "compelling reason." Tijuana, Mexico, 21 July 2021. 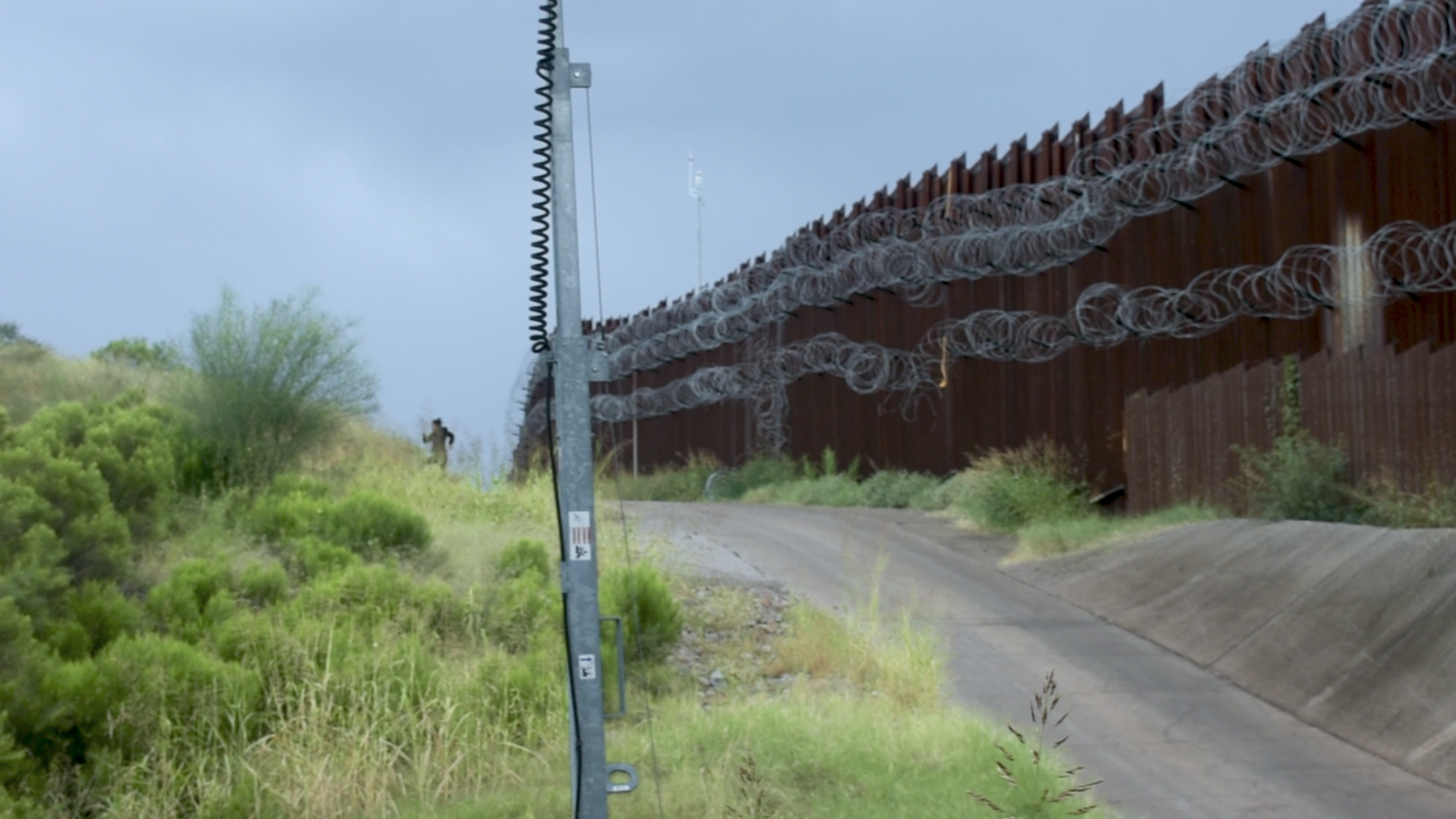 A woman is on the run after she climbed the border wall with the help of a rope provided by two smugglers. Nogales, USA, 25 September 2021.

One key problem with the migration debate is the concept of an “economic migrant”, a term often used by politicians to justify punitive immigration policies, but one which hides the reality facing many who make the journey, Dr Wolf argues.

“What is overwhelmingly clear through my research – and what we aim to show in the documentary – is that many of those travelling without documents are forced migrants – people who have faced threats of one kind or another and have had no choice but to abandon their home. This means that although there is still an element of the individual decision over whether to make the journey, that decision is taken in a context where it has become virtually impossible for them to have a sustainable livelihood or to live in safety,” she says.

“The reality for many is that there is no alternative to migration, and so the responses of countries such as Mexico and the United States don’t solve the problem, they just exacerbate the cycle of migration and deportation.”

Dr Wolf cites El Salvador and Honduras as an example in point. Urban gang violence is endemic, she explains, while in the countryside, many farmers are no longer able to grow crops and put food on the table. “These aren’t unique problems - we see these patterns being repeated across the world,” she continues. “This is about rising inequality, about people faced with structural and physical violence, but also the effects of climate change that are behind forced migration across the world.

For many there is no alternative to migration, and so the responses by countries such as Mexico and the United States… just exacerbate the cycle of migration and deportation.

When asked how policymakers could better tackle the issue, Dr Wolf is clear that there is no easy answer. “Governments need to take a holistic approach,” she explains. “It’s not just a case of fixing migration policy or fixing security policy – there are many interconnected issues that all need to be addressed.”  Despite the enormity of the task, she does have suggestions for both transit and destination countries.

“We need to screen people better,” she says. “Governments can’t simply claim that migrants entered a country unlawfully, because this is what they’ve had to do in order to even claim asylum.”

Dr Wolf also cautions against focusing too much on people smugglers. “We often hear that greedy smugglers endanger the lives of migrants,” she explains. “But smugglers are just providing a service to people who are finding it increasingly difficult to enter a country because of restrictive migration policies. The demand for smugglers would be lessened if screening was improved, if we were to really try to understand individual cases, instead of simply deporting people en masse as quickly as possible.

“Of course, tackling how to deal with migrants either during or at the end of their journey is only part of the response needed, because people shouldn't have to leave their communities in the first place,” she continues. “Governments also need to look at what is actually happening in the countries of origin and address the issues - for example the violence or economic hardship - that are driving forced migration.”

What audiences ought to take away from this documentary is to see themselves as changemakers who must do their part in defending human rights and fighting for social justice.

Advocating for those without a voice

Ultimately, Dr Wolf believes, the situation will not improve without a change in political will at both ends. “Nations of origin need to tackle the problems that are causing people to leave. But governments in destination countries must also change their approach,” she says.

“Often, they argue these are merely economic migrants and should therefore be returned to their country of origin. It’s very different to acknowledge that these are forced migrants who need humanitarian assistance while they’re in transit and international protection as they settle, because they can’t return home."

It is this idea of human rights-based policies that Dr Wolf maintains is most missing in modern political discourse around migration. By shining a light on the journeys of some of those compelled to make the journey from Central America to the United States, she hopes The Vertical Border will help start the discussions needed to bring about change.

“My motivation for making this documentary was not to speak to policymakers but to citizens,” she concludes. “My hope is that by helping people to put themselves in the shoes of migrants - to understand and empathise with those fleeing violence – we can pressure governments to implement genuine solutions.

“It’s easy to blame governments for the persistence of harmful policies, but I would like people to reflect a little more on their own role in the world. What audiences ought to take away from this documentary is to see themselves as changemakers who must do their part in defending human rights and fighting for social justice.”

The Vertical Border was written and directed by Dr Sonja Wolf and co-produced by the Drug Policy Programme at the Centro de Investigación y Docencia Económicas (CIDE) and Habesha Media, an NGO that works to ensure inclusive education for refugees. Watch The Vertical Border (with English subtitles). Listen to Migrant Voices, a podcast produced by Dr Sonja Wolf, on Spotify.

Dr Sonja Wolf is Visiting Fellow in the Latin America and Caribbean Centre at LSE. She is author of "Mano Dura: The Politics of Gang Control in El Salvador" (University of Texas Press, 2017). Her research focuses on civil society, street gangs and migration, as well as security and drug policies, especially in Latin America. She has conducted ethnographic research on gang policy activism and qualitative research on forced displacement due to gang violence, the relationship between street gangs and organised crime, police violence, drug policy reform and iron fist security policies of progressive governments in Central America.